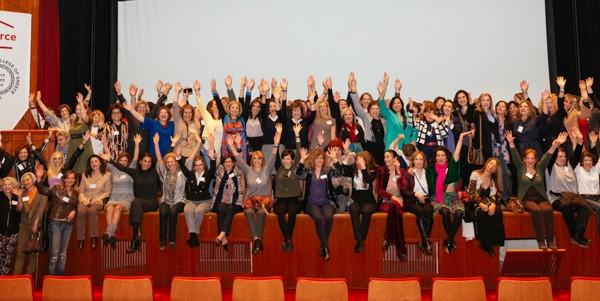 It was amid lots of hugs, laughter, and emotion that the Class of 1978 met on March 22, 2018. After what may have seemed like a lifetime, friends reunited and celebrated 40 years of friendship.

In the Pierce Theater, Ms. Maria Laina, Executive Director of Development and Alumni Relations and Dr. Dimitrios Andreou, Vice President of Administration and Enrollment, cordially welcomed the alumnae back to their school. Pierce’s new Principal, Mr. Eric Trujillo, also greeted them and extended his appreciation as they honored the school once more with their presence.

There to make welcome remarks was Ms. Sofia Antonopoulou, their former professor, who warmed many hearts as she remembered many of the students. Finally, alumnae of 1978 Ms. Markella Karagiorga and Ms. Marina Tzavellou-Diamanti took to the stage to address their fellow classmates and remind them what those school years meant to them, how significant it was for their future development and what they meant to each other.

They introduced an alumnae-made video, with images from the past and present, which reminded everyone of their hopes and dreams of a better future.

Lastly, they all sang the school’s anthem like they used to 40 years ago.

Continuing with the Pierce Ambassadors’ tour of the school, many alumnae were amazed at the changes! They proceeded to the cafeteria, where Pierce students of the Entrepreneurship team of the Junior Achievement Club presented their student company as well as their plans for the near future.

The alumnae were thrilled with the students’ initiative and dynamism. They donated to the fundraiser whose aim was to support the team and, in parallel, encourage youth entrepreneurship in Greece.

The alumnae’s kind words were proof of the love they have for their school. Touch Base talked to Metina Kandelidi, Klairi Tsalouxidou, Tina Mourtou, Sadrina Katartzi, Marilena Georgiadou and Marina Tzavelou, all of whom were very excited to be back. As they told Touch Base, their experience at Pierce provided them with everything they needed:

“There was nothing we couldn’t do. As an all-female school, it gave us the power to do anything. It was a deeply liberal school; very democratic, with values and principles, without ever being oppressive. It had something that is missing from today’s society – equality. We all felt equal, as if we were one.”

Even after 40 years their special bond could not be broken; to their school and to each other. Their energy, dedication and friendship inspires us and we wish them all the best.