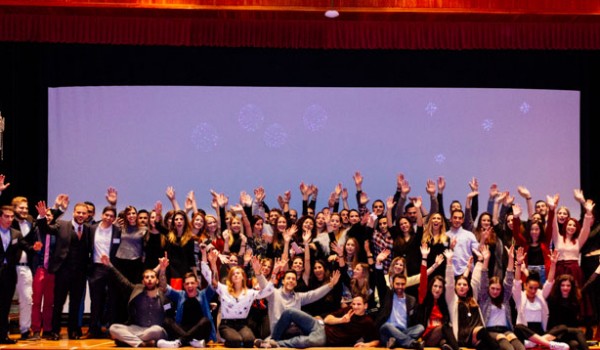 To greet the alumni, warm opening remarks were delivered by Ms. Maria Laina, Executive Director of Development and Alumni Relations and Mr. Theodosis Drakopoulos, their Physics teacher. A touching address was made by classmate, Mr. Alexandros Chrysos, P’07, who reminded everyone what their time at the school meant. Also there to greet the alumni were Mr. George Vakerlis, Lyceum Director, Mr. Ioannis Kladas, Gymnasium Director as well as numerous of their old teachers, something which brought great joy to all.

What followed next was a true testament to the class bond. Ilias Bogdanos (P’07) and his band, Inconsistencies, played live music to the cheers of his classmates. For Ilias: “it’s a symbolic day, to be performing on the exact same stage, to the exact same people, 10 years later, at the place where I gave my first live [concert], this time as part of a successful band. Pierce helped me be the person I am and gave me the footing to achieve, from even the simplest ambition of socializing, to making my dream come true and play at my first live concert, and eventually making it as a professional musician.”

Soon after the alumni toured the campus where a “treasure hunt”, organized by the Pierce Ambassadors, brought back memories of the cheerful competitive spirit between each class! The “treasure hunt” concluded at the Pierce Cafeteria, where everyone had a chance to catch up and network, forging new paths and relationships.

Coming back to school after 10 years was a touching experience. For Tony Rigopoulos (P’07), who supported the organization of the Reunion with Marita Vakerli (P’07), being back at Pierce was a “bittersweet feeling. It’s nostalgic being here, but a joy that we graduated, that we moved on with our life and that we see how everyone has fared in life. I don’t think I’d be the same person if I had not come to this school.”

In a digital age, no amount of likes can substitute the laughter, the smiles and the hugs of friends.

Not one… not two… but five Deree classes! Five Deree classes are going to celebrate their reunion at Deree on June 9th, 2018, at 20:00! Taking place in the context of the Deree Open Fest, a 2-day, multi-themed festival open to all alumni and friends, held on June 8 – 9, 2018, the reunion is surely going to be a night to remember, with memories to last a lifetime! Please RSVP, share with your classmates and don’t forget to update your records to stay in touch with your alma mater and classmates, to receive the latest news about events, reunions and more! See you there!