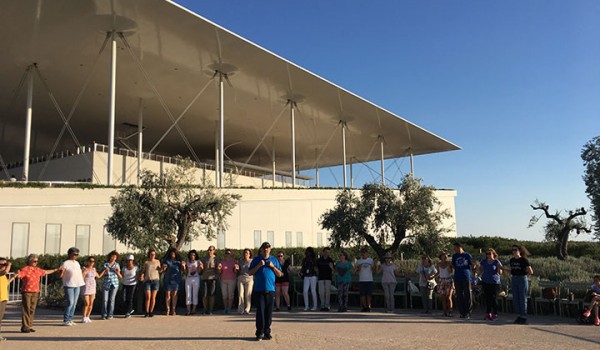 Is there a better place to learn about Greek art than Greece itself? For Roman Thorton, this was not even a question. He decided to study abroad during the summer of 2017, at the American College of Greece. As part of his class “Aspects of Greek Art in Athens,” he and his fellow students explored Greek art through museums, galleries and ancient sites in the city.

“How can you pass up an opportunity to learn about Greek art in Athens, not in some school back in Boston?” he said, as a sophomore majoring in liberal arts.

Thorton was part of a group of 8 students from North Shore Community College (NSCC), who attended classes during the summer of 2017 as part of a $50,000 grant from the Gerondelis Foundation to support study abroad scholarships for deserving students from Essex County, Massachusetts. ACG partnered with NSCC to identify students through a rigorous selection process.

This grant eliminated the barriers, so these deserving students could benefit from this transformative educational experience. According to the study “Global Competence and National Needs: One Million American Students Studying Abroad,” by the Commission on the Abraham Lincoln Study Abroad Fellowship Program, students who participate in education abroad experience significant growth in interpersonal skills, academic performance and cultural proficiency.

These findings were echoed by the students. “The people you meet. The school here. It’s just an amazing experience,” said Michael McGreal, a sophomore majoring in computer programming. “Personally, it’s given me a great new perspective for my life.”

In addition to their coursework, students also participated in numerous trips including a daytrip to the island of Hydra, hiking and a cave exploration on Mt. Hymettus, a traditional Greek dancing workshop at the Stavros Niarchos Foundation Cultural Center and an afternoon at an Attica beach.

“I never thought I would be in Greece. I’m just so thankful” said Egbert Sayers, who is majoring in Computer Science. “It broke my traveling shell. I’m ready to go everywhere now.”