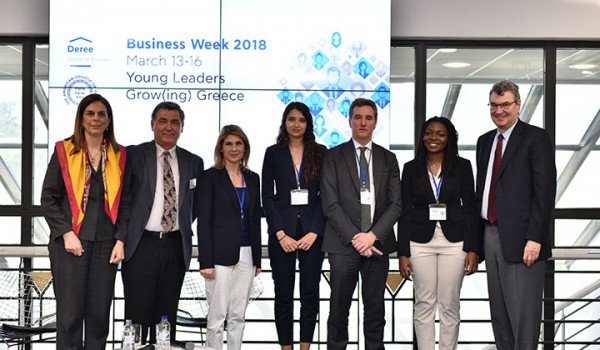 This year’s theme was “Young Leaders Grow(ing) Greece”. It was selected by the students of the School of Business to represent the trend of younger people in positions of responsibility in the corporate environment, the many successful examples of young entrepreneurs and their role in restarting the growth engine of the Greek economy.

Students had the opportunity to participate in presentations and workshops featuring 31 speakers, including Declan Costello, Mission Chief for Greece in the European Commission, who, in his keynote speech, discussed the prospects and opportunities for a Growing Greece. The students were particularly honored as he visited Greece especially for Deree Business Week! Regarding the future of the Greek economic-readjustment period Mr. Costello said on a positive note: “The European Commission strongly agrees that Greece is able to successfully conclude the Economic Adjustment Program within 2018.”

Following next, Dr. Aggeliki Kosmopoulou (Pierce ’84), Executive Director at A.C. Laskaridis Charitable Foundation and Member of the Board at The People’s Trust, and Paul Kidner, General Manager at The People’s Trust, were two of the many other prominent speakers from the corporate and startup scene, who primarily discussed how young entrepreneurs can take advantage of opportunities in Greece, despite the challenging conditions.

During the forum, two special workshops were organized in the brand-new Simulated Trading Room, led by Nick Hinoporos (Deree ’85), CEO and Board Member at Capital Life Advisors AG Switzerland.

Among the distinguished guests in Business Week 2018 were recent Deree graduates who already enjoy a successful career.

Deree Business Week 2018 was organized by the Academic Societies of the Business School and created by students who put their academic knowledge into practice and develop soft skills during the 4-month preparation period for organizing, promoting and hosting the event.

We congratulate them on their successes and wish they keep on inspiring generations of students to come.