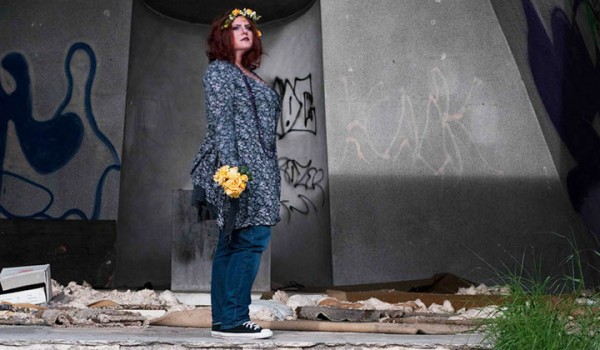 Success works in mysterious ways. What might initially seem like an overnight success, in most cases takes countless hours, dedication and patience to achieve.

Artemis Zannou (P’01), singer and songwriter, whose debut album “Secrets and Tales” won a Golden Record in the Greek market in 2017, never imagined the success. “It all came down to two days,” Zannou said.

But let’s rewind the tape.

She took her first steps as a performer at Pierce, where she got into theatre, a path she pursued professionally for some time. It was there that she met Mr. Yannos Tsatalis, her Greek Literature teacher and head of Department of Ancient Greek Language, who was in charge of the Theater Club.

Mr. Tsatalis holds a special place in her heart. A testament to this was his attendance at the award ceremony on November 12, 2017, where he made a dedication to her. “He’s not only a Greek literature teacher. […] He was very dedicated and that passed on to me. He deeply influenced my evolution,” she said.

And evolve she did. It was through hard work, dedication to her craft, and determination that she won the Golden Record.

Though the songs were written back in 2007 and recorded in 2015, it wasn’t until 2017 that everything fell in to place. She was put in touch with a record company that took a liking to the material and within 48 hours they had set up a deal, explaining to her the available options and electing to publish the album alongside a newspaper.

The rest is history. By not giving up and by being at the right place, at the right time, Artemis achieved a lifelong goal. “Success doesn’t mean the same to everyone. It’s not a permanent status, nor an end in itself. You always start over! It’s difficult to achieve. You need to know why you’re singing and why you’re playing. What you’re doing it for. Your reasons need to continue to inspire you, because it’s a rough road, with many ups and downs, but also a lonely one. Don’t think that it will be easy. But [perseverance is] a good indicator to assess if you want [success] or not.”

Regarding her time at Pierce, she considers it a blessing. “It had a people-centric approach, which changes your mentality. If you trust your environment, it trusts you back. Teachers give you a part of their soul.”

We sincerely wish her the best with her touring and hope to see another successful album from her very soon.

For more information you can check out Secrets & Tales at Melon Music, her blog, Facebook page and Youtube channel.