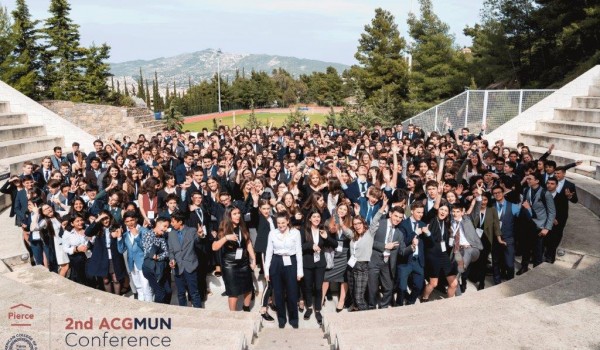 For the second consecutive year, the American College of Greece Model United Nations (ACGMUN) Conference took place March 16-18. Organized by the Pierce MUN Club and with the approval of the Hellenic Ministry of Education, Research and Religion, students from Greece and abroad engaged in thought-provoking discussions. In these times of world turmoil, the organizing team wanted to raise awareness on the vital UN goals of equality and stability in the global community.

Delegates tackled crucial global issues and were called to find solutions to issues relating to human rights, to improving living conditions of minority groups and even threats of war.

Overall, more than 300 students from 20 schools from Greece and abroad (the Netherlands, Turkey, India and Cyprus), representing 15 countries, along with 36 teacher-advisors attended the Conference. Pierce students took part in all the Committees, organized the Conference and volunteered their services throughout the three-day Conference. The MUN Club is one of the over 60 Pierce student clubs and has been dynamically participating since 2013 in conferences in Greece and abroad. The very successful Pierce organization this year took full advantage of the facilities and the human-centric tradition of our School, which has played a defining role in the humanitarian crises of Modern Greek history.

MUN Conferences are a valuable experience for students, as they encourage them to be informed and to raise their awareness regarding important aspects of current affairs and to broaden their knowledge as tomorrow’s citizens of the world. At the same time, these conferences give students the opportunity to develop their speaking skills in debate and to hone their skills in diplomacy. They bring together students from all over the world, from different environments and countries. Model United Nations is a longstanding institution that has its roots in the 1920s. It offers students the unique opportunity to function as diplomats – delegates from different countries and to endeavor to find solutions to problems that concern the international community, from the point of view of each country.