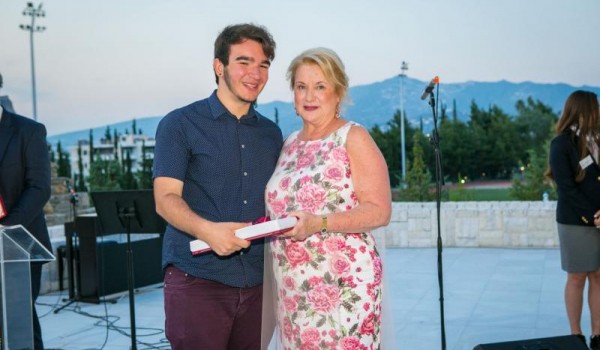 On Monday, June 26, Pierce held its Awards Night, to honor all graduating seniors of 2017 who distinguished themselves for their contributions and activities in the student community, school life, clubs, as well as extra-curricular competitions and championships.

The first honorary distinction was awarded by Marianna Vardinoyannis (D ’03), UNESCO Goodwill Ambassador, and President of the Association of Friends of Children with Cancer “ELPIDA,” to the members of the Pierce student enterprise Youthelp. Youthelp is a Pierce student enterprise that operated during the academic year 2014-15, as part of the Junior Achievement Greece program, with the approval of the Ministry of Education. Its 35 members were A’ and B’ Lyceum students, and it had its own capital and organization. The basis of the business was to create and operate a social crowdfunding platform in cooperation with the Association of Friends of Children with Cancer “ELPIDA.” Youthelp carried out huge information campaigns on social media, and won the First Prize among all the Greek (both real and simulated) startups in the field of Social Responsibility. It also won the awards for Social Entrepreneurship and Marketing at the Junior Achievement Competition, among other awards, and represented Greece at the Global Enterprise Project, conquering the second place in Europe. All proceeds gathered through the use of the platform went directly to ELPIDA. Another “first” of the evening was the faculty-established award in honor of Principal Olga E. Julius, who retired this year after serving the College for over 40 years (1975 – 2017). The award will now be given every year to the graduating senior who has an excellent conduct record throughout their years of studying at the College, has shown leadership skills with a human touch, and possesses drive, kindness, and humility, as well as an excellent academic performance in English, and who distinguished themselves in school life activities organized by the English Department, thus demonstrating the values of both Greek and American culture. The award was given by Principal Julius to the graduating senior Demosthenes-George Caldis. Further honorary distinctions were awarded to graduating seniors who distinguished themselves with their contributions and active participation in school life, their cooperation with classmates and teachers, and their community service within the student community. The Pierce Awards 2017 concluded with the presentation of honorable mentions to the students that were part of the editorial team of the Greek and English Magazine, the Drama Club, the Forensics Club, the Junior Achievement Club, the Choir, the Orchestra, from Art and Athletics, those who took part in and received distinctions at Harvard Model Congress Europe (HMCE), Model United Nations (MUN), Ambassadors, as well as Pan-European and Pan-Hellenic academic and athletic competitions and championships. Congratulations to all! We wish you a bright future and hope that you will always distinguish yourselves with your talent, skills, and spirit!

For more information, see the full description of the awards, and the event program.