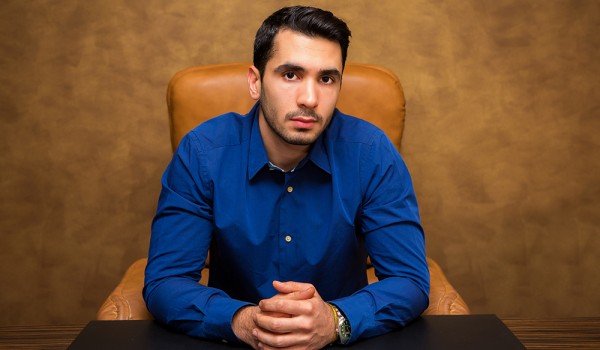 Born in Athens in August 1987, Nikolaos Koronellos graduated from Pierce – The American College of Greece in 2005. In 2010, he completed his studies at the National and Kapodistrian University of Athens, graduating from the Department of Biology. Alongside his undergraduate studies, he also began conducting research on the squamous cell carcinoma, at the Maxillofacial Surgery Clinic of the University’s Medical School, using molecular biology techniques.

In 2013, Dr. Koronellos published his first paper in an international research journal, and has continued in the field of research since, but this is also when he started training in the Tomatis Method, which he completed in April 2015 upon gaining the highest title of Tomatis Consultant. At the same time, the Pierce alumnus created the Tomatis therapeutic center called “the mind symphony” in Holargos, Athens.

Q.: What is the Tomatis Method, in a nutshell?

The Tomatis Method is the only singular healing technique of stimulating the brain through the hearing system, using appropriately processed classical musical pieces, with wonderful results to the mind, psychology, behavior, and generally throughout the human body.

The method was developed in 1957 by the French otorhinolaryngologist Alfred Tomatis who recognized the healing properties of classical music and made the most of it. For that reason alone, his discoveries were acknowledged in 1960 as the “Tomatis phenomenon” at the University of Sorbonne in Paris.

Q.: What are the most common disorders or difficulties you encounter through your practice?

Increased demands imposed on modern society, and particularly its intense rhythms, lead more and more people to search for an outlet or solution of some sort. Both children and young adults come to our center for help in dealing with problems such as learning difficulties, attention disruption, concentration spans, dyslexia, hyperactivity, stress, anxiety over their academic curriculum and examinations, and difficulty learning foreign languages. On the other hand, adults primarily seek help with issues such as depression, intense stress, panic attacks, memory failure, phobias, and more.

Q.: Does one need to be musically-inclined to fully benefit from this type of treatment, or is this nothing more than a simple preconception? Are there any other misconceptions relevant to what you do that you wish to address?

To the contrary! Although some familiarity with music, especially classical music, creates a sense of intimacy with the musical selection, the Tomatis Method is ideal for people of all ages, regardless of their musical background, because it helps through smoothly stimulating and activating the brain.

As with all kinds of therapies, it is worth clarifying that the therapeutic effect is primarily based on the patient’s genuine desire to be helped, their adherence to the therapeutic framework, and the bond created between patient and specialist.

The specialist studies the issue in great depth and detail, and obtains results via specialized diagnostic acoustic tests, in order to adequately adjust feedback relating to each patient’s needs and requirements, by focusing on their personal history. By assessing all this information, the specialist can create a holistic and personalized treatment program, with the ultimate goal being to help the patient achieve lasting results.

Q.: In your material, you refer to the ear as “the orchestra conductor of the nervous system,” though many laypeople might think of the brain as the “grand conductor.” Could you elaborate on this idea? Is this why you named your center “the mind symphony”?

The brain, undoubtedly the most mysterious and unexplored organ of the human body, projects endless and amazing potential. For this reason, it is included along with the kidneys and eyes in the “noble organs” and is so well protected within the bone skull. Just as the conductor is vital to orchestras producing most distinctive melodies under his guidance, the ear also plays a prominent role in brain mobilization.

Gandhi once said, “If we have listening ears, God speaks to us in our own language, whatever that language may be.” The ear, after adequate stimulation, carries through the auditory nerve large amounts of information and energy into the cerebral cortex, which controls human behavior and skills. Indeed, according to Alfred Tomatis, in addition to hearing and balance, the third function of the ear is to help with brain loading, which is crucial to our biological, physical, mental, psycho-emotional development and progress.

The name of our center “the mind symphony” is symbolic in meaning as it represents the beneficial effect of classical music, which after special processing, is used in the Tomatis Method, aiming at mental and psycho-emotional harmony.

Q.: Over 250 schools in Europe employ this form of therapy. What do you think the future of the Tomatis Method is in Greece? Do you think it’s possible that schools here might embrace its use and benefits?

A few years back I would have hesitated to answer this question but, nowadays, the Tomatis Method is becoming widely accepted, due to its 60-year evolution, as well as its worldwide therapeutic results as a method, which are indisputable and in the thousands. Also, more and more people are becoming aware of the Tomatis Method; its application range allows them to choose to help themselves or a loved one experiencing some form of the so many difficulties treated by this method.

With regard to our country, I like to think that its educational and academic instritutions will very soon follow in the steps of Europe, and apply and incorporate the Tomatis Method as an invaluable and effective tool made readily available to enhance student performance.

Q.: With years of studies in the field of Biology, you seemed to be going down a more research-based path. How then did you get involved with the Tomatis Method, and what first drew you to it?

From my third year of my studies in the Department of Biology of the University of Athens up until today, I have been heavily involved in the research of this field. And since I was both working on and studying the neurophysiology of the brain, I often thought about the issues of learning, communication, and the behaviors of modern man on a daily basis, which all have a neurobiological and psychological starting point.

My passion for Health Sciences, combined with vocational advancement of my studies and the psychoanalytic training I received for 10 years definitely triggered my interest in the Tomatis Method. Becoming informed and reading broadly on this method is what prompted me to train on it. I was impressed by both the way the Tomatis Method influences the brain and the nervous system, as well as its beneficial effects on the entire human system. As mentioned previously, at present, it is the only therapeutic, non-pharmaceutical method that stimulates so many areas of the brain with such great results.

After completing my training and receiving the title of Tomatis Consultant, I was deeply intrigued and decided to create “the mind symphony” therapeutic center – a unique place, worthy of such treatment.

Q.: People often feel stressed and worn-out, with little control over their reality. Is there something they can do by themselves at home that can help them, and introduce them to the power of the Tomatis Method? For example, a particular piece of music you would recommend they listen to?

As is widely known, music in the ancient world was a powerful tool for harmonizing spirit and body. As a result, in difficult times, it is vital to seek relief through some form of music. During such moments, Mozart’s music can be a powerful “helping hand”. Some of his most relaxing works are the Magic Flute, String Quartet, Sonata for Two Pianos, the Third Violin Concerto, and the Fourth Violin Concerto, as well as several of the children’s pieces he composed.

Equally useful pieces from other major composers include Beethoven’s Sixth Symphony, several pieces by Bach, Mendelssohn’s Concerto for Violin, the Four Seasons of Vivaldi, as well as musical pieces of rock, jazz, and tracks with sounds of nature.

Undoubtedly, the research that established the healing and creative forces of sound and music in general, and Mozart’s work specifically, is that of Alfred Tomatis. This is why it resonated so loudly and became widely accepted, with the French Academy of Medicine coining it the “Tomatis Effect”.

Q.: How did your time at Pierce influence your career path?

I consider myself most fortunate to have been given the opportunity to experience this school. The structure, organization, and environment at Pierce helped me on many levels. The opportunity to experience so many different educational programs – from sports activities in its jam-packed facilities, to cultural events including training trips, travel abroad, speeches and various exhibitions – allowed me to accumulate rich and significant knowledge, to develop my social skills, to enjoy true friendship and, lastly, to acquire a variety of interests.

Indisputably, it was an incredible journey that helped me mature, and to lay down strong foundations, manifesting my motivation to evolve step by step, on a never ending day-by-day adventure.

My remarkable and distinguished teachers were by my side at all times with an insatiable appetite to teach, showing me respect and understanding, both in times of difficulty and success.

I will always cherish them and remember them with much love and gratitude. If I were to go back to my school years, I would choose the same school all over again because it still remains an illuminating period of my life on so very many levels!