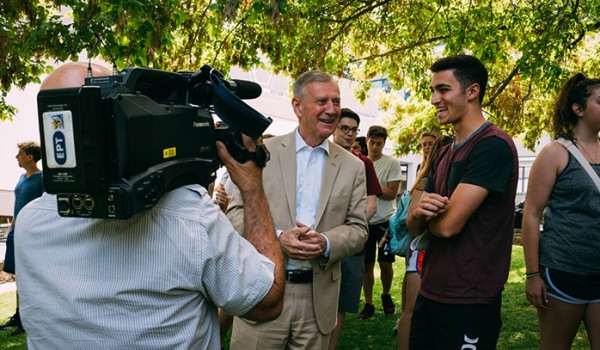 This Is America & The World is a weekly, international affairs television series, produced in Washington, D.C., New York City, and in countries around the world. The series is distributed nationally on PBS, and internationally on Voice of America. Through interviews with world leaders, and men and women from all walks of life, Dennis Wholey explores the varied cultures of our world.

Wholey visited Athens to examine life in Greece today, as part of the “Greece Today” series. The American College of Greece was honored to welcome the show’s presenter Dennis Wholey to the Aghia Paraskevi campus, where he spoke with ACG President David G. Horner and Art Dimopoulos, Executive Director of the National Hellenic Society, as well as the 62 students visiting Greece through the Heritage Greece Program. Heritage Greece is a program developed by the National Hellenic Society, and hosted by The American College of Greece.

It is an unforgettable educational and cultural program designed to connect Greek-American students of college age with their Hellenic heritage. For one visiting student, having grown up listening to her grandfather’s stories it was “incredible to see the land that he came from!”

But it also has a profound effect on the host Greek students as well, as “Bringing students from around the world to our campus connects our students personally to the rest of the world,” Dr. Horner said.

“When you show them Greece, you get to see it through their eyes, and it’s beautiful…” said a Greek student, “the feeling, the excitement they have, it’s precious!”

Watch the full episodes of the “Greece Today” series: Part I | Part II