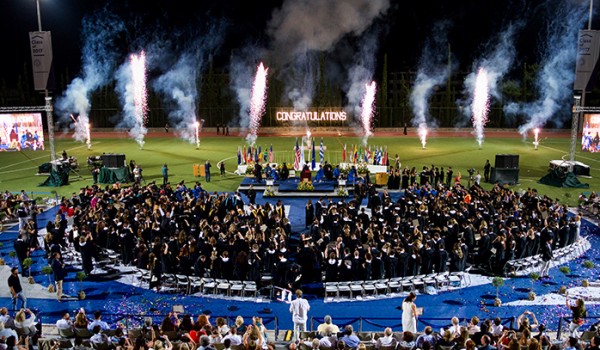 The annual Deree Commencement, our biggest event of the year, celebrates the perseverance of each and every one of our students, and all the hard work that has led them to this wonderful occasion, their graduation day!

Students of The American College of Greece distinguish themselves in various venues: in classrooms, studios, and laboratories; on playing fields and performance stages, in campus organizations and volunteer service in the community; in study and internships around the world. On June 28, at the 2017 Student Awards Ceremony, over 140 students and graduates received awards, recognizing their outstanding performances in a range of student achievements!

And so, on Saturday, July 1, more than 360 undergraduate and graduate Deree students from 24 countries gathered at the track and field to be awarded their bachelor’s and master’s degrees, joining the 5,000-strong ACG alumni family.

Dr. David G. Horner, President of The American College of Greece welcomed the graduating students and their friends and family, along with the Board of Trustees, and ACG faculty and staff to the 2017 Deree Commencement Ceremony.

“The Deree graduates we focus on this evening have worked hard and richly deserve the recognition we will bestow upon them,” said Dr. Horner adding that, “they are ready to navigate the challenges of a global economy and to be constructive agents of social change.”

Dr. Horner then introduced the United States Ambassador in Greece, Geoffrey R. Pyatt, who honored Deree with his presence, bringing a greeting on behalf of the people of the United States. US Ambassador Pyatt addressed the graduating Class of 2017 saying, “Your outstanding education has given you the tools to make a difference. Now it’s up to you to engage, connect, and make changes – in your own communities and in the global community. Your generation can build a bright future for Greece, and for all of us!”

The 2017 Commencement Address was delivered by this year’s honorary degree recipients: Olga E. Julius who has served as the Principal and driving force of Pierce – The American College of Greece for 42 years, and Philip C. Korologos, who has served as Chair of the ACG Board of Trustees since 2011.

Pierce Principal Olga E. Julius received the honorary degree of Doctor of Letters, and with her characteristic smile and sweetness said, “How lucky am I to share this night with 368 graduates! It is my great pleasure to have been associated with this institution for 42 years. I have been extremely fortunate to have spent my life in secondary education, transferring my love to the children, enjoying abundant opportunities to develop innovative programs and experiencing extraordinary moments.”

Principal Julius added, “The missionaries who envisioned the creation of this school in Smyrna, Asia Minor, in 1875, devoted their time, talents and energy, worked in challenging times, not seeking praise or credit, promoting the idea of education for girls, which was revolutionary in those times, in Turkey. It has been my great privilege to inherit and to build on this proud history and tradition!” Philip C. Korologos, a partner in the law firm of Boies Schiller Flexner LLP in New York, joined the ACG Board of Trustees in 2006, was its Vice-Chair from 2009-2011, and has since served as Chair of Board.

Upon receiving the honorary degree of Doctor of Laws, Mr. Korologos addressed the graduating class and shared with them a few values he has picked up over the years to further the ACG mission. “Firstly,” he said, “take what you have learned here and use it to your best advantage. Really use it. This great faculty has taught you to think, to care, to believe, to hope, and to desire achievement. Take those lessons with you on all your future adventures.” And secondly, “Don’t hope that others will make you great. Aim and strive for that greatness through your own acts and deeds. Your future achievements will provide distinctive and sustainable value to Greece, to Hellenic heritage, and to the global community!”

Graduating student Peter Paraskevopoulos followed, delivering the 2017 Student Address. Just before he received his Bachelor of Arts in Psychology, Peter shared a few parting thoughts with his fellow graduates saying, “More than anything else, Deree will remain ingrained in our minds and spirits as fostering three core values: diversity, leadership, and meritocracy. This graduating class represents the strength of diversity in action. We represent 24 different countries, various ethnicities, cultures, and genders; and yet, despite our differences, we have learned to work collectively toward common goals.”

“We also learned to lead and make a difference in our communities,” Peter said, with respect to the many experiences the students have had during their time at Deree, ranging from studying and working abroad as interns, to participating in the active student life on campus, to volunteering in community outreach programs.

Peter gracefully ended his address by urging his fellow classmates to “aspire to lead with dignity, to listen instead of declaim, and stand our ground when we witness injustices.”

And as the Conferral of Degrees began, 368 graduating Deree students donned their brightest smile and, cheered on by an audience of their peers and supporters, they were awarded their degrees of Master of Science, Master of Arts, Bachelor of Arts, and Bachelor of Science, on a night that concludes years of hard work and perseverance, and exciting opportunities and experiences.

President Horner gave his closing remarks saying, “While others helped to bring you to this moment, it is you who claimed this investment and made it your own. Now you stand at the threshold of a future you must also claim as your own. Graduates of 2017, we are proud of your accomplishments; we are the better for our association with you as colleagues in learning, and we send you forth in confidence to share the gifts that you, uniquely, can offer!”

As Dr. Horner presented the Deree Class of 2017, the excitement came to a crescendo as colorful fireworks filled the summer night sky! The Deree Class of 2017 was loudly and joyfully cheered on by an ecstatic and proud audience, celebrating their accomplishments and wishing them luck, inspiration, and determination in their next steps.

On Sunday, July 2, the friends and family of graduating students were joined by President Dr. David G. Horner, members of the Board of Trustees, the Pierce Principal, the Gymnasium and Lyceum Directors, as well as ACG staff and faculty, all gathering at the track and field to congratulate the Pierce Class of 2017. The 180 Lyceum students wore their caps and gowns and sang the College Alma Mater one more time, cheered on by the entire audience! Parents, friends, relatives, teachers and the entire College family gave them their best wishes for their next steps in their studies, their careers, and their lives. Pierce Principal Olga Elaine Julius was this year’s commencement keynote speaker, who is retiring after 42 years of loyal service to the College. For all those years of dedication and spirit, she was awarded the honorary degree of Doctor of Letters at the Deree Commencement Ceremony 2017.

“I am very, very lucky to have been the 11th Principal of Pierce,” said Principal Julius. “I lived every day of my life feeling content and joyful. I taught skills and in return I received life lessons. From my students, I learned that true teaching is a very particular type of alliance. It only works when the teacher sees beyond the external image, looks at the heart of each student, and understands and respects what they see.”

Olga E. Julius ended her last speech as Pierce Principal by sharing some wisdom with her students. “Whatever you decide to do, do it for the right reasons. Remember that whatever happens, happens now, so live in the now. Your life will only be truly successful if it bears the stamp not of material gain, but of creativity, imagination, vision, and selfless love.”

The graduating seniors were then greeted by the President of The American College of Greece, Dr. David G. Horner, after which Principal Julius presented recipients with their awards. The President’s Award was presented to Maria Estela Michail, the senior with the best performance in English (18.8/20), and the Minnie Mills Award to Nicholas Patas, the senior who was a role model for leadership in the school community. The Academic Achievement Awards were presented to the seniors that achieved the highest average grade on their Lyceum Certificate: Georgia Doufexi was the Valedictorian with the highest Certificate grade (20/20) and Michael Verdelis, Romanos Papadakis Persianis, and Ioannis Filippos Psilopoulos achieved the second highest average grade on their Lyceum Certificate (19.9/20), earning the title of Salutatorian.

Dr. S. Sue Horner, Scholar in Residence, presented the Harvard Prize Book to Sofia Chavele – Dastamani, the B’ Lyceum student who demonstrated excellent academic performance and ethos and who distinguished herself in many areas of school activities. Pierce is the first and only school in Greece to present this particular award and, every year, both the award and the name are proposed and approved by Harvard University. Two graduating seniors, Christina Iosifidou and Ioannis Filippos Psilopoulos represented their class and delivered speeches in Greek and in English, respectively. The event ended with the awarding of English Language Certificates.

Graduates of 2017, we wish you the best of luck in your lives and hope you keep in touch with your alma mater!
We will always follow your accomplishments with tremendous joy and pride!