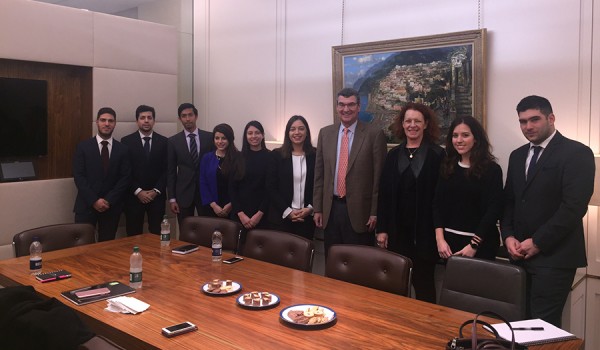 On Wednesday, February 15, during his visit to London, Dr. David G. Horner, president of The American College of Greece, met with Deree Winter 2017 interns at the Libra Group’s London office.

The meeting had the form of a discussion regarding the Libra internship experience, global political and economic updates, as well Deree news such as the rising number of study abroad students, which help make the campus a multicultural hub!

Dr. Horner highlighted the importance of the Libra Internship Program and the opportunities it offers. He further stressed that the interns have a unique chance to learn a lot from being in a real-world professional setting, but still nurtured by such a successful and supportive corporate environment such as the one the Libra Group offers.

Current Lomar Shipping employee and Deree ‘13 graduate Mark Kethisouaran discussed the importance of the Libra Internship Program and added that, “This meeting was yet another sign of how this program has managed to develop a welcoming and sustainable relationship between the former interns and the new generation.”
[photo]

“Meeting with President Horner was an extraordinary experience, mainly because we were meeting as professionals rather than students. The conversation was very interesting and enlightening. What is also worth mentioning is that we were meeting as a family and it gave us a chance to get to know our interns who also studied at Deree better.”

“We had a very interesting discussion with President David G. Horner and his wife, S. Sue Horner. Also, it was a great opportunity for me to meet with Deree alumni that work for Libra in London or in different subsidiaries than the one I am currently part of as an intern.”

“For me, the meeting with President Horner and his wife was very moving. The topics discussed were highly interesting, and all in all it brought up many memories from my days on the Deree campus.”

“Meeting with President David G. Horner was such an exciting moment, and I felt that the international ACG community was ‘bonding’. It was also a reunion of current and former Deree students, which we all appreciated and were moved by. ACG alumni should stay connected and get involved in such events, strengthening the ACG community and its presence internationally.”