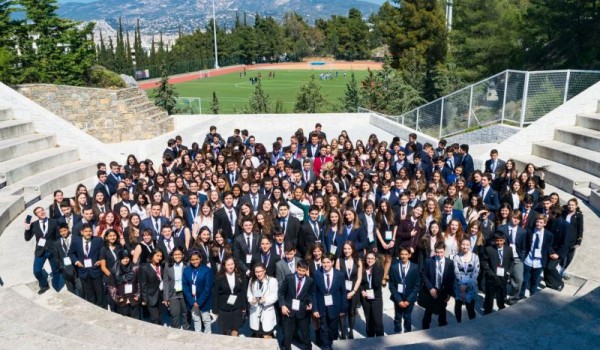 The First Ever ACG MUN Conference

Since 2013, Pierce students have been taking part in the annual Model United Nations (MUN) Conference. This year, for the first time ever and after tremendous dedication and hard work, our students hosted the MUN Conference at Pierce – The American College of Greece on March 31 – April 2.

The student representatives from Greece and abroad took part in the first ACG MUN and grappled with a number of crucial global issues such as the demobilization and reintegration of child soldiers, the strengthening of education in areas affected by war, the right to assisted suicide, exploitation of marine resources, the ban of toxic waste dumping, and many more topics.

The MUN Conference is an extraordinary educational opportunity for students as it introduces them to important global matters and helps them process and develop their understanding of such complex issues. Moreover, it gives tomorrow’s global citizens the opportunity to advance their presentation skills, rhetoric and argumentation, to sharpen their diplomacy skills, and also to meet fellow peers from around the world.

Find out more about the first ACG MUN here.

On March 10 – 13, a team of 24 Pierce students from the B’ Lyceum class participated in the Harvard Model Congress Europe (HMCE) hosted in Madrid, Spain, with the support of AB Vassilopoulos. The HMCE is a simulation of the US Government in all areas of its activities giving students the opportunity to research, collect information, conduct their own research, and study current issues regarding Law, International Relations, Economics, Environment, Health, Human Rights, and Journalism.

Under the guidance of Harvard University trained students, the delegates participated in committees in positions of the Senate, the Supreme Court, and the Court, and in international institutions such as the World Bank, the European Union, and others.

We are extremely proud of all our students for their success at this year’s Harvard Model Congress Europe! This year’s Forensics Pan-Hellenic Competition of English Rhetoric took place at the Anatolia High School of the American College of Thessaloniki, March 16–19, and the Pierce delegation consisted of 27 gymnasium and lyceum students.

Several of our students acquired important distinctions in the competition, including Youli Tiligada who won first place in the Expression of Literary Text (comedy category), Dimosthenis Kaldis who received Honorable Mention in the Motivational and Impromptu Speaking categories, and who won eighth place among almost 120 speakers at the debate.

Dimosthenis was also unanimously elected by the Head Coaches of 21 school-members of the Pan-Hellenic Forensics Association to receive the Pat Kastritsis Award. Each year, this high distinction is awarded to one graduating student who has stood out and inspired students from other schools with his dedication to Forensics.