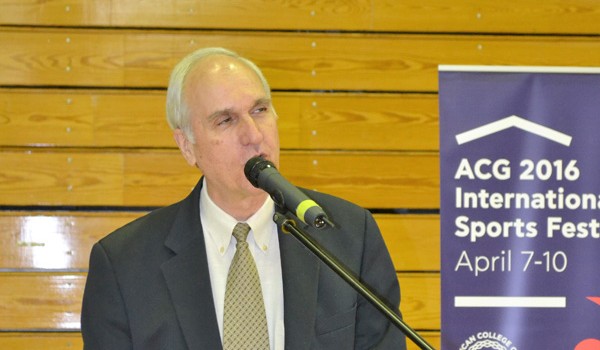 Deree recently hosted the ACG 2016 International Sports Festival, welcoming almost 500 student-athletes from 8 universities from Greece and abroad. Over 46 team matches, and 120 individual matches were played during the four-day festival organized by the Office of Athletics of Deree, ranging from soccer, basketball, and volleyball, to tennis, table tennis, and swimming.

This year’s festival was a double celebration, as the ACG community gathered to commemorate the 40 years Arthur Christopher spent at Deree as its visionary Athletic Director (1972-2012), during which he created an extremely successful program, inspired by the high-quality athletic standards of US colleges. While he lived in Greece, Christopher played professional basketball in AEK Athens, he was a member of the Greek national team, and he furthered his career as one of the top Greek basketball coaches.

Arthur Christopher was presented with the recognition award during the ACG 2016 International Sports Festival awards ceremony, where the Deree Gym Court’s brand new name was also unveiled: The “A. Christopher Court.” A small token of appreciation, always there to remind future generations of his vision and hard work, his warm character and his tremendous ethos.

“This award is something I’ll remember for the rest of my life, but… the way I felt on the day I received it, it is even more important to me than the award itself,” said Christopher. “There was an outpouring of affection, respect, and recognition of an effort… But that effort wasn’t me specifically- it was a team effort; it was the administration, my staff, and also the thousands of student athletes that went through the program… So, I accepted this award and recognition on behalf of all those people as well.”

Reminiscing about his time at ACG, Christopher said one of his fondest memories is “the day-to-day contact I had with the students, they have a tendency to keep you young!” In the context of the International Sports Festival and the importance of such opportunities, Arthur Christopher said, “I really enjoyed the international trips that we made. Over the years, we made 11 trips and had the opportunity to see different cultures… Trips have the capacity to allow for better bonding with not only the students, but the staff also. There’s a bonding, a camaraderie there that you just don’t get on a day-to-day basis.”