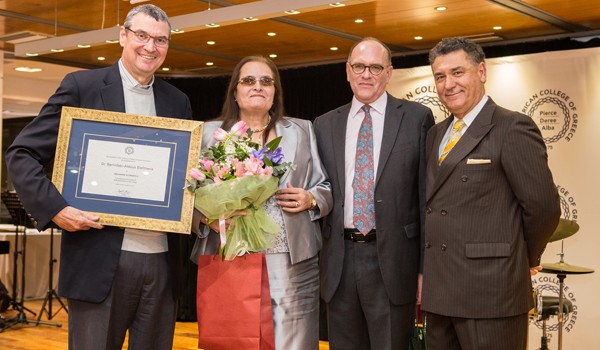 On the occasion of her appointment as Professor Emeritus: “We are inspired by the Tradition in order to inspire the future generations of ACG”.

Upon her appointment as Professor Emeritus, Dr. Eleftheria Bernidaki-Aldous expressed her gratitude to President Horner for the opportunity the American College of Greece gave her (as she said), first to study as a Pierce High School student, and later to work as a Classics Professor at Deree (continuing a university teaching career in the U.S.). On many occasions over many years (in her lectures and publications), she has talked about her deep affection and close life-long relationship with ACG. During a time of strong discrimination against blind people and adverse state legislation in Greece, she said that she was admitted (“after passing the entrance examinations”) to Pierce Junior High School (1st Gymnasium grade) “as an exception” (the first blind student). At Pierce, she was given the opportunity to participate fully to the social life of the school (school parties and excursions), to live in the dormitory, and to participate in many extracurricular activities (e.g., as a member of the school Choir, as a member of the editing board of the school magazine Sunny Days).

Having graduated from Pierce with high distinction, she continued her studies in the U.S. (The University of Rochester and The John Hopkins University). Having received a BA, two Masters and a Ph.D. in Classics and History (studying with full tuition scholarships), having received many honors and awards (including an Academy of Athens Award), she served at the Hellenic Parliament as a Member of Parliament State-wide (Επικρατείας). On all occasions, she emphasized her affiliation and her love for the American College of Greece. In addition to her memories as a Pierce student and her work as a Classics Professor at Deree, she experienced Pierce as a mother of 3 children, all proud Pierce Alumni. In this year of ACG celebration of 140 years since its foundation, Dr. Bernidaki-Aldous completes a remarkable cycle of life with ACG. Her testimony illustrates the ACG spirit and enhances the legacy of inspiration from the tradition for the building of the future.

1. You were recently named Professor Emeritus following a teaching career at Deree – The American College of Greece that started in 1992. Will you remain active at the College, and how?

I will remain active at the service of the American College of Greece all my life, because it is the school which gave me a ticket to life. I am grateful for the title of Professor Emeritus, bestowed on me by President Horner this year (2016), as I am for the invitation by President Bailey to teach at Deree as Professor of Classics long time ago (1992). ACG became my home when I was admitted to Pierce High School as a first-year Junior Highschool student (the first blind student) with full tuition scholarship at a time when it was practically illegal for blind students to attend regular schools. “Main-streaming” was not the trend and the President Margaret Stewart with the Pierce Teachers’ Council took the initiative and the risk to accept me and to give me an opportunity to study in one of the “best schools” of Greece.

2. In your lifetime so far you have accomplished a lot: scholar, parliamentarian, teacher. What do you regard as your most important singular achievement?

I value each one of these areas of accomplishment and I am proud of my contribution. As scholar, I am thrilled to know that my book Blindness in a Culture of Light: Especially the Case of Oedipus at Colonus of Sophocles is still receiving favorable criticism and considered internationally one of the influential sources on Greek culture. As teacher, I am happy and proud to know that my students over many years (U.S. and Greece) remember me as a fair, hard-working and enthusiastic advocate of Greek and Roman literature and history. I know that I influenced all of them to want to work hard and inspired them to face life difficulties with more determination. As a parliamentarian in the Hellenic parliament, I am most proud of my work as Chair of “the Committee on Issues Regarding People with Disabilities”, the work of which resulted in many laws protecting the rights of people with disabilities, including the Law that made (for the first time in Greece) education “obligatory” for children of all kinds of disability. I helped change laws and attitudes which had made my own opportunity for education as a child very difficult.

3. You are a classicist in an era when Classics education is shrinking. How relevant are the Classics for young students? How can they inform the modern experience?

The study and teachings of the Classics is very relevant and meaningful for all people—young and old. The epitome of Greek culture, i.e., “all humans are subject to suffering and death”, is the basis of Western civilization (from Greece and Rome through the Byzantine Empire, the Renaissance and the Enlightenment). From this understanding derive all principles of humanism affecting humanity worldwide. The study of such truths will always be relevant.

Dr. Bernidaki the year of her graduation from Pierce.

4. Losing your eyesight at a young age was obviously a defining event for you. How did it affect your character?

I believe that for the most part “Character is Destiny” and how a person confronts what is destined defines the person. In the “Oedipus at Colonus”, e.g., Oedipus becomes a hero (is deified), not simply because he suffers (incestuous patricide, blind, exiled, beggar, polluted), but because he suffers nobly (according to Sophocles and common belief). However, I cannot deny that this accident that caused my blindness at the age of 3 has influenced my life both in practical terms and in the way I had to learn to distinguish what is important from what is insignificant and superficial. From a very young age I had to decide to take control of my own life, since others usually were wrong in their perception of what I could do, as a “blind” child. I had to remove boundaries others placed for me, I had to be stubborn and determined in the pursuit of my goals.

5. You have worked tirelessly to improve the lot of people with disabilities in Greek society – through your legislative work – and at The American College of Greece. Where do we stand today as a society and as a school?

6. This academic year, The American College of Greece celebrates the 140th anniversary since its creation. As a graduate of the College, what do you think the role of this institution is in Greece today?

The role of the American College of Greece continues to be important for Greek society after 140 years since its foundation. It has educated young girls in the beginning and young men as well later. It has survived through war and helped form Greek reality in many ways in times of peace and times of economic crisis. ACG was always generous with scholarships to its students, but has increased the number of scholarships as needed. ACG inspires by its motto “non ministrari sed ministrare”. Its graduates are present in business, in education, in community affairs, in Greece and abroad. Our alumni are active abroad (U.S. and Europe) as successful professionals and remain interested in the developments of their alma mater. ACG can serve as a model to Greek society of the excellence of private, non-profit higher education and can best connect Greece with world academic and professional community.

7. Among the teachers and administrators at Pierce who you studied under, who would you say was the most influential in shaping your personality and your future?

I am grateful to all of my teachers and the administration of Pierce at the time when I was a student. However, the teacher-administrator who I must mention as the epitome of the spirit of the school, is the late Koralia Krokodeilou. She was my guardian angel. She believed in me and was there for me always. She received me at Pierce as the Dean of Students when I entered as a first-grade Gymnasium student, but she was also physically present at Kennedy Airport in New York when I arrived for the first time (knowing no one in the States) as a young Freshman enrolled at the University of Rochester. She put me on the plane from Kennedy to Rochester with her blessings! She received me as a mother of 3 children when I came back to Deree as a Classics Professor. She was the embodiment of the American College of Greece “spirit”.