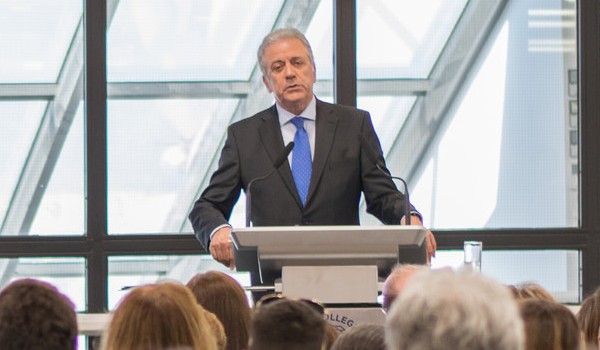 On Thursday, March 31, Dimitris Avramopoulos, European Commissioner for Migration, Home Affairs and Citizenship, visited The American College of Greece for an insightful presentation on the current state of migration and the refugee crisis, the broader issues of the European immigration policy framework, and future actions.

In collaboration with the Office of Public Affairs, the presentation took place in the context of a series of events, workshops, and seminars organized by the Institute of Diplomacy and Global Affairs. Vice President of Public Affairs Claudia Carydi gave opening remarks, welcoming a large audience of ACG students, staff, alumni, politicians, media, and diplomatic dignitaries. Mr. Andreas Andrianopoulos, Director of the Institute of Diplomacy and Global Affairs, introduced EU Commissioner Avramopoulos, highlighting the speaker’s long career in the political and diplomatic landscape. Commissioner Avramopoulos took the stage and, after thanking ACG and President David G. Horner for the invitation to speak, he reminisced of the time when ACG awarded him with an honorary degree 19 years ago.

The EU Commissioner set the tone by stressing that security and migration need to be addressed globally as there are currently over 50 million refugees across the world. “This is a global issue, and we can only address it together, not against each other… We can’t stop migration, but we can become better at managing it,” he said, stressing that the issue is not about numbers, “We are talking about people.”

He added that he is inspired by the challenge and the duty of overcoming these international issues through his work with the European Commission, while trying to be as helpful as possible to his country in these demanding times.

Commissioner Avramopoulos argued that “this century will be remembered as The Era of Human Mobility,” and that “the refugee crisis is challenging the very foundation of Europe; solidarity,” referring to the threatening rise of xenophobia and nationalism in various member states of the EU.

“History repeats itself,” said Avramopoulos, reciting the renowned quote, but added, “No, it doesn’t. Men repeat history because they do not read it.”  The greatest threat to Europe is the rise of nationalism and populism, as “the narrative of the nationalistic parties is disorienting the thoughts and feelings of the people… They are exploiting this humanitarian crisis, and these ideologies will lead Europe back to its dark past,” said EU Commissioner Avramopoulos.

Commissioner Avramopoulos went on to present the actions taken so far by the EU to tackle the refugee crisis in Europe, such as the increase of human resources for Frontex operations, the creation of “hotspots” to support the identification and fingerprinting of refugees, and the mapping of the migration flow. He also discussed the relocation policy, which aims to relocate 160,000 refugees to EU member states in the next three years.

“The European Commission is morally and politically bound to support member states in providing refugees with healthcare, shelter, education, and decent living conditions,” stated Commissioner Avramopoulos, adding that it is up to individual member states to implement such projects. On that note, the speaker stressed that “Europe is part of this solution, Greece is not alone in this. The European Union is standing by; financially, politically, and morally.”

The Commissioner further discussed the significant differences between refugees and migrants, explaining that refugee status is granted to people in need of international protection, who are often fleeing terrorism and war. In regard to the terrorism in Europe, the speaker also categorically denied a link between the incoming-to-Europe refugees and the ongoing terrorist attacks, highlighting that in most cases the terrorists are in fact attacking the country they grew up in.

The speaker shared his views on the upcoming proposal for a legal migration policy, adding that one of the key components of the action plan is the relocation of illegal immigrants. Therefore, individuals who are not granted refugee status will be relocated to their homelands, and if they wish to return to Europe, will have to do so through safe, legal channels.

The second tier of the plan is to crack down on the smuggling network in order to prevent, or at least hinder, the entry of more refugees and immigrants through illegal, and often life-threatening conditions.

Other initiatives include the effort to reform the Dublin Regulation, the development of “smart borders,” and the targeted use of EU funds. Avramopoulos also stressed the importance of EU countries sharing information which, coupled with a deeper trust between member states, can significantly help Europe deal with these ongoing issues.

One of the worst elements of the multifaceted crisis Europe is currently facing is the rise of xenophobia, said the EU Commissioner adding that, solidarity in the EU “is not just a moral value, it is a legal principle written in the texts of the treaties… Our role is to defend these treaties, and give a boost to the EU dream of a united, peaceful and progressive union.” 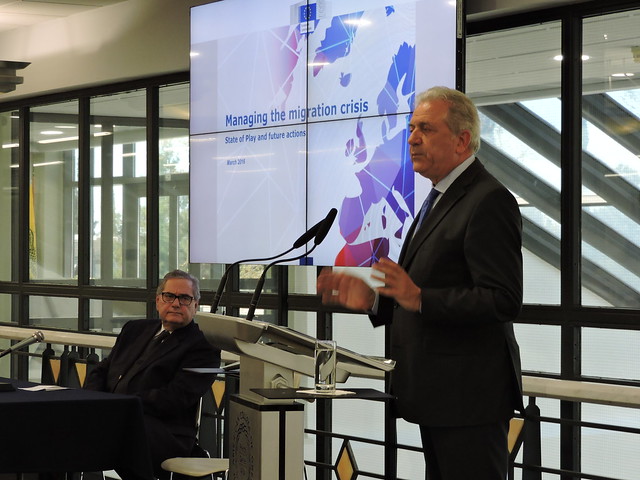