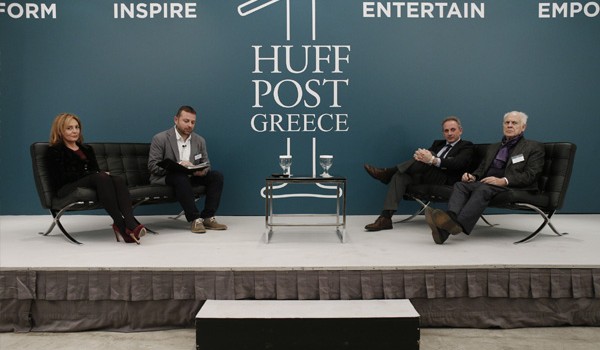 Dr. Dimitris Andreou, vice president of Enrollment and Administration at The American College of Greece (PIERCE – DEREE – ALBA), was one of the panelists in a discussion on education that took place December 10 as part of the celebrations for the one-year anniversary of Huffington Post Greece.

Dr. Andreou and fellow panelists Dr. Michalis Meimaris, a professor of new technology at the Department of Communication and Media at the University of Athens, and Eleni Papadimitriou,Company Communications Manager South East Europe, discussed how education can be a driving force in combating unemployment, and how academic institutions and graduate training programs offered by companies can contribute to the development of students. Huffington Post Senior Editor Fotis Nakos moderated the discussion.

Dr. Andreou argued that education can help combat unemployment and that, to a large extent, it should be about increasing the employability of the graduates. He referred to a 2014 McKinsey study, according to which 45% of Greek employers cannot find suitable candidates for unfilled positions. Professor Meimaris, on the other hand, argued that higher education should not be driven by the needs of the job market.

Ms. Papadimitriou said that, based on P&G’s experience in over 80 countries, Greek graduates have high levels of academic experiences and training and would benefit from further enhancing their soft skills such as the ability to communicate effectively, to use time efficiently, and to multitask.

Extracurricular activities, such as those offered at DEREE, that include student clubs and societies, participation in international competitions as well as early exposure to the demands of the workplace through internships can help students improve their soft skills, according to Dr. Andreou, and thus should be an essential part of the modern higher education experience.

Commenting on how the financial crisis has affected private education in Greece, the ACG vice president said that The American College of Greece is fortunate in that it is able to rely on income other than tuition, such as infusions from its endowment and donations from institutions and individuals. These sources are proving crucial in these difficult times, Dr. Andreou said, adding that this is perhaps the greatest competitive advantage of the American model of non-profit higher education followed by ACG.

“By nurturing a feeling of safety in parents and students, you can have a strong impact,” Dr. Andreou said, giving as an example PIERCE – ACG’s secondary education division – which has seen enrollment soar by 40% at a time when the private secondary school student population shrank by 20%.

Regarding higher education, Dr. Andreou emphasized that academic institutions should not rely on a single business model or address a limited audience. For example, unlike public universities where there is resistance to courses or programs conducted in English, classes at DEREE and the ALBA Graduate Business School are in English, appealing as a result to a much more global potential student audience. This immersion in English language instruction and the opportunities for international internships and study abroad are some of the reasons that hundreds of public university students pursue parallel studies at DEREE. The Stavros Niarchos Foundation has recognized the need for such public-private synergies and offers scholarships to DEREE parallel studies students who excel.

“There are ways to get around the crisis, but we have to expand the market and internationalize our institutions,” said Dr. Andreou. The added benefit of internationalization is that it creates a multi-cultural educational setting, which is highly beneficial for students, he added.

Huffington Post Greece’s one-year anniversary workshops were held at The Hub in downtown Athens, in collaboration with 24 Media. They included discussions with leading figures from politics, education, start-up entrepreneurship, tourism and development. Huffington Post hopes that this one-day series of panel discussions will become an annual event in the “Greek tradition of bringing people together and sparking important discussions,” as Arianna Huffington, co-founder and president of the Huffington Post, said in her video message to the audience.

For more on the event, including information on the other panel discussions and workshops, please click here.