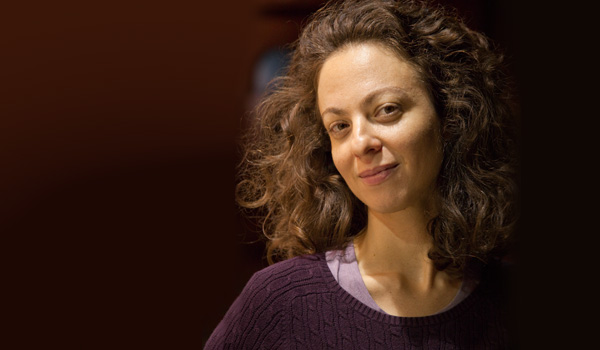 New York directing credits include Nathan Wright’s Peninsula, which won an Outstanding Ensemble Award at the 2013 New York International Fringe Festival (FringeNYC). She is currently working on bringing Hôtel Méditerranée to Greece, a new theater piece she directed at the Between the Seas Festival in New York.

Nadia loves to remind herself and others that we only have one Earth.

Q.: Having directed both in NY and in Athens, what are some of the challenges you’ve faced in each place? Which city do you prefer to work in, and why?

Whether in New York or in Athens, indeed, directing is by definition a challenge, so you have to accept this reality, otherwise you’re in the wrong business. It is my duty (and my joy) as a director to overcome obstacles and make the best out of each process.

The difference in the mentality around –and the management of– time is the main challenge one has to face in both cities: I often give the simple example that the rehearsal period measuring unit in Athens is the month, whereas in New York it is the week. Time and space cost so much more in New York than in Athens, where –in spite of the financial crisis- in theater there is still abundance of resources.

Shortage of time and space forces you to be creative, productive, and make choices. In most productions I have worked in New York (including Peninsula at FringeNYC) we are usually given only hours in the performance venue – tech and dress rehearsals and opening take place in a couple of days (of course all of this after the rehearsal period in the rehearsal venue has concluded).

In Athens this would be inconceivable –artists get to be in the performance venue for several days, if not weeks, prior to opening. And yet practice has proven that you can tech a show in two days (I’ve accomplished this both with Greek and American casts in New York) –it’s just a matter of focus and discipline. On the other hand, Athens offers the luxury of longer runs: it is common for shows to run for weeks, even months –something extremely hard to achieve in New York.

I am incredibly fortunate to be able to split my work between the two cities and to maintain long-lasting relationships with valuable collaborators both here and there.

Although the quality of theater and the talent of the artists are equal in both places, behavior does make a difference: usually Greeks tend to mistake professionalism for timidity. They think that if you are polite and well organized, you are weak. In New York it’s the opposite: everybody is polite. If you are rude, you are fired -they’re simply going to find another person with equal talent but better personality.

Q.: Have you ever considered directing a film? Why or why not?

Yes, I have – I hope to be able to make films as well in the future. I love film – I have always been a movie buff, spending endless hours devouring movies.

So far though, I have only been using film as “fuel” for my theater engine: ever since I started to direct I have been exploring the intersection between staged action and the projection of still or moving images. It is not by accident that my first theater group was called “Cinemato-theatron”, and that in most of my shows I use projections.

In Shakespeare’s Romeo and Juliet for example, half of the main characters were first filmed, then incorporated into the theatrical action through the use of projectors, with the on-stage cast interacting with them! And more recently, Hôtel Méditerranée was a collage between Charles Mee’s play Matisse’s Self Portrait and Stelios Charalampopoulos’s film documentary Yiannis Moralis.

Q.: Your latest project, Hôtel Méditerranée, was crowdfunded; what do you think the role of social media is for supporting the theater?

Indeed, Hôtel Méditerranée was the first crowdfunding campaign I have ever been a part of, and it was an unimaginable success: my producer Regina Vorria and I did not simply reach but exceeded our fundraising goal!

This palpable example is proof that, even in harsh times, there are generous people out there who enjoy giving because they love theater and believe in it.

Also, crowdfunding specifically in theater comes to cover an important need: it is possible that someone might want to support your work but may not be able to actually come see your show (my case as an international artist being a perfect example for this: Hôtel Méditerranée was supported by friends in various countries, who were simply unable to come see the show). A crowdfunding campaign gives those people the chance to show their support, even if they never make it to the show.

I believe there is room for crowdfunding in Greece as well, but in theater there is a difference in the mentality between Athens and New York that has to be taken into account: in New York people take it for granted that, in order to go to the theater, they have to pay for their ticket. This is not anymore the case in Athens, with the trend of free tickets having spread widely over the past few years. Many people may be supporting you on social media, but they won’t necessarily pay for their ticket.

Q.: How did your time in PIERCE foster your creativity and love of the theater?

Both my schools (I attended kindergarten and elementary school at Aidonopoulou) offered me open field to cultivate my creative and artistic skills, through the main curriculum and through other activities (orchestra, theater club, staging Shakespeare etc.).

But, I think the deeper success of both schools was nurturing a broader belief in education and collaboration. Theater is a team sport, and I like to think that being a member of the volleyball team prepared me as a player. And the belief in education is fundamental for a director, if we consider him/her as someone who does not simply master a craft, but who should also have something urgent to say to the world about the human adventure.

Q.: Tell us about a dream project of yours.

Music was the first form of art I fell in love with, so my dream is to direct a big-scale opera production, Tchaikovsky’s Eugene Onegin preferably…

Q.: What advice would you give to students studying Theater Arts in DEREE, or young professionals starting their career?

Persevere! “Theater is impossible,” as my professor and mentor Anne Bogart says. But when it does happen, the world becomes meaningful. Art is what gives life a shape.