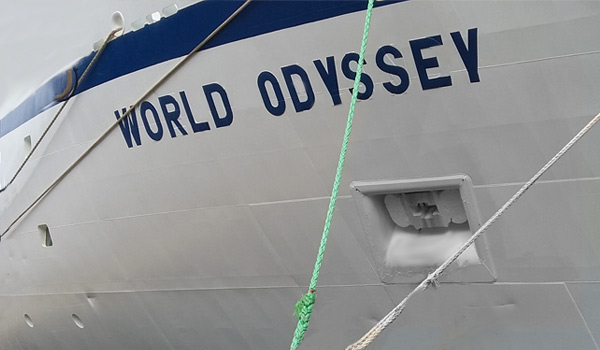 Imagine if you will, a semester of studies with classmates from places you’ve never heard of, aboard a 175-meter luxury ship, calling at ports all over the world. Anthropology in Morocco, Communication in the port of Salvador, Brazil. Field labs in Trinidad and Tobago, and finishing up a term-paper while stationed at the Puntarenas port of Costa Rica.

It’s almost too good to be true, and yet, such a learning experience exists, we have proof! This fall, Dr. Antonis Klidas, Department Head of International Business at DEREE, and student Omiros Gkioumes, were ‘suspiciously absent’ from our campus.

The two ACG members boarded the floating campus of World Odyssey in Dubrovnik, Croatia on October 1 and travelled as members of the shipboard community to the port of Piraeus.

Semester At Sea offers a unique educational opportunity to approximately 600 US and international students every semester, who embark on a learning odyssey around the globe, receiving transferable credit toward their major at home.

An inconceivable learning experience, providing active and experiential learning on board, and immersion experiences in individual cultures with field labs in the different countries visited. Around 60 members of faculty and staff make this enriching and engaging global educational experience possible, with the University of Virginia as its current academic sponsor.

DEREE Provost, Dr. Zaharopoulos, visited the World Odyssey and met the Academic Dean of Semester At Sea, Sharon L. Hostler, at which time they discussed opportunities for further collaboration between ACG and Semester At Sea.

A Journey Around the World

The World Odyssey began its journey on September 13 in Southampton (UK) and will reach its final harbor on December 21 in San Diego (USA). This semester, the ship will call at the following ports:

For a heavy dose of wanderlust, the next grand voyage in spring 2016 embarks from San Diego, and sets sail for Hawaii, Japan and China, traveling to Vietnam, Burma, India, and crossing the Indian Ocean to reach Mauritius. After 3 ports in Africa, it will finally arrive in Southampton, UK.

In the future, DEREE students and faculty will have the opportunity to climb aboard the World Odyssey on one of its awe-inspiring expeditions.

Admit it, you’re tempted to come back and study again aren’t you? Well, we may or may not be planning nautical-themed outfits…