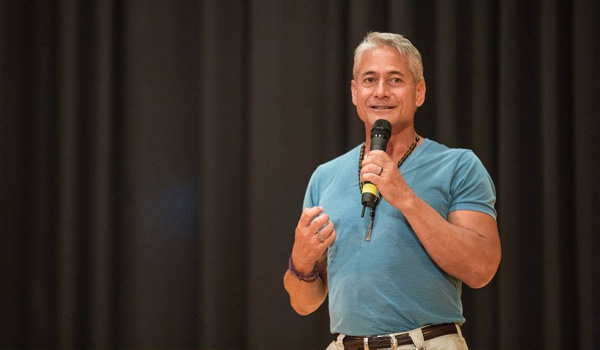 The American College of Greece, in collaboration with the non-profit organization “Kentro Zois,” hosted the presentation by Olympic medalist Greg Louganis entitled “Breaking the Surface”.

Greg Louganis spoke to ACG students who enthusiastically welcomed him as he walked up the stage in the packed PIERCE Theater.

The event aimed to raise HIV/AIDS awareness. Louganis was diagnosed as HIV positive more than twenty years ago. Despite his diagnosis, Louganis competed in the 1988 Seoul Olympic Games and won two gold medals.

At the Seoul Games Louganis hit his head on the end of the springboard while executing a dive; after getting five stitches, he climbed back on the board and executed the best-scored dive of the day, leading to his gold medal win.

Four-time gold medal winner Louganis “broke the surface” and shared his weaknesses publicly in his book Breaking the Surface.

During his presentation at The American College of Greece, he shared with the audience his love for and appreciation of his mother and how described how she contributed to his success.

The athlete spoke about his book and mentioned how the difficulties he faced while he was in school turned him into a stronger person.

“Bullies were my motivating factor,” he said.

Coming to an end Louganis gave an inspiring message to those who hesitate to share their sexual identity. “Everybody is on their own journey as far as accepting themselves. The first person you come out to is yourself. It all starts from there; realizing that you are still a good person and accept yourself for who you are.”

The DEREE LGBT Awareness Club supported the event and at the end of the lecture a representative of the club gave Louganis a T-shirt as a gift.