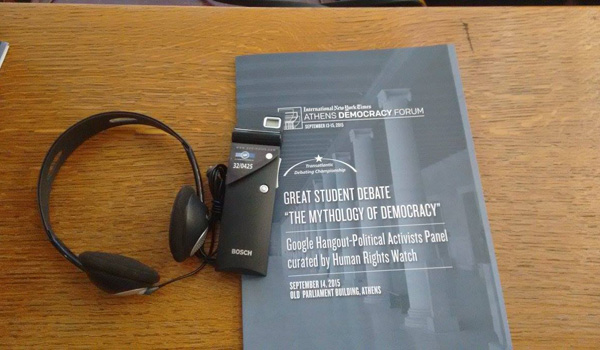 Democracy, Debate and Deree: Past, Present and Future

The Athens Democracy Forum 2015 took place on September 13-15 at the Megaron Athens and at the Ancient Agora of Athens. The event was organized by the New York Times (NYT), under the auspices of the United Nations Democracy Fund and the City of Athens. The aim was to reflect on the state of liberal democracies, the major challenges they face in the world today, and democracy’s ever-changing role in the way we live and do business.

Following its policy of supporting initiatives that place Greece in the center of the global map as the cradle of civilization, democracy and education, The American College of Greece proudly supported this event as an Educational Partner and also hosted international students who participated in the International Debating Competition.

The debating competition took place at the Old Parliament Building in downtown Athens and was filled with young debaters from around the world who participated in the international student debating competition. Seven debating teams from some of the most important educational institutions (Princeton, Cambridge and Oxford University) in the world (USA, Asia, Africa, and Europe) took part in the competition.

Two DEREE students, Vassilis Gkoumas and Peter Paraskevopoulos, represented ACG and Greece in the competition. The bright young speakers debated on the topic “The Mythology of Democracy,” bringing myths and demons of democracy to life amidst an enthusiastic audience.

Among the jury were renowned personalities from various fields including distinguished economist and Nobel Laureate Paul Krugman; former head of British Intelligence, Sir Richard Dearlove; former Minister of Education Anna Diamantopoulou; and President of the International New York Times, Stephen Dunbar-Johnson, who welcomed the audience- surrounded by the most vigorous historic frame one could wish for: the Old Greek Parliament, representing past, present and future.

The winning team was the one representing India and Sri Lanka (Asia), and consisted of students from the universities of Cambridge, Oxford and Warwick.

The Middle East/North Africa (Syria, Morocco) team was the runner up, with students from the European Law School, Supaéro University and École Polytechnique de Bruxelles.